There has been quite a bit of buzz on the neighborhood Yahoo group about raccoon activity in the area lately. Nestled smack in between both lovely Victorian-era Green-Wood Cemetery and equally beautiful Prospect Park in Brooklyn, we are no strangers to urban wildlife. (Let me tell you about the evening that I took the trash out, only to have an opossum pop its head up from the open can and stare me down!) One recent spring I had the enormous pleasure of watching a female raccoon raise a litter of four baby raccoons, or kits. I could hear the kits crying. That’s how I knew they were there. (Curious? This is what it sounds like.) The furry family was living in the neighbor’s roof, and I could watch the action right out my window. I was mesmerized.

Every evening the momma would prowl for food, creating a serious ruckus. Every morning the trash cans were toppled, and trash was strewn everywhere. One morning — just after dawn — I caught her lounging on the roof, as if exhausted from the night’s scavenging (see above.) When the kits were old enough, the mamma trotted them out at dusk each evening, and taught them the basics of survival — such as how to descend the roof via the nearest tree, and how to open the trash can lids. I wish I could have photographed the silhouettes of the raccoon family on the peak of the roof against the night sky. The kits romped and played, getting more daring each night. Of course, now that the whole family was in on the action, night-time pillaging and screeching increased to a fever pitch. I know the neighbors finally took action because I went away for a long weekend and when I returned, the hole in the roof was repaired and the raccoon family was gone. The neighbors had to do it — if it’s your property at stake, the scenario I describe is not so charming — but I was really sad to see them go. Have any of you had similar experiences? Do tell!

Find more of my work online! 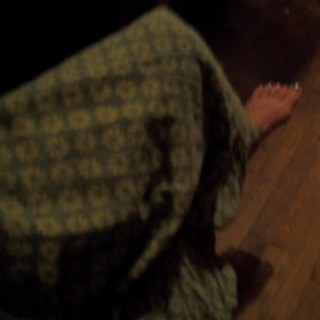 To Dye For, Part II

LAVA: A Godessey (aka The Show I Missed)